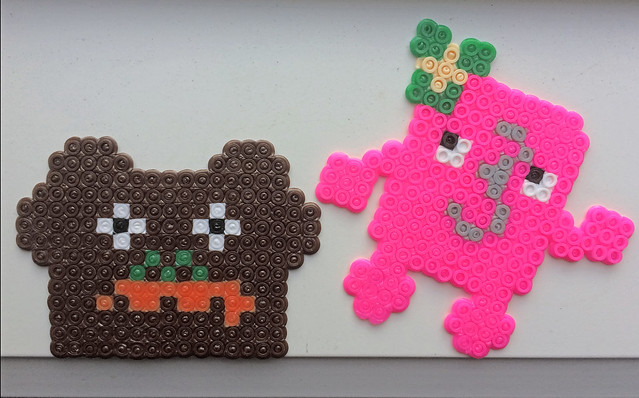 Last week, the lil critter set up her pop-up store, aptly named Pinkxi’s Happy Beads, at the craft market. She had put together quite a few fusebead pieces, designed her stall’s poster, priced and inventorised all the items. BBM was not sure if she would have the concentration to man her lil retail space throughout the market, but she tried her best and even gotten herself some company with another critter friend at the market. BBM was just glad that the critters enjoyed themselves and Pinkxi mustered the courage to talk to potential customers checking out her stuff.

When they got home, BBM helped Pinkxi work out her earnings and after deducting the cost of the beads, she made a grand total of $28! BBM, curious about how she felt about her takings, asked what would she like to do with the money – would she like to spend it on something that she likes later that day or would she prefer to have it saved away in her piggy bank to be used for another day. Pinkxi thought for a while and decided that since $28 is not much, she would rather have it in her piggy bank. Spurred by the first outing, she was keen to have another go at their next market date.

A couple of days later, Pinkxi came home from school and excitedly told BBM that she had attended an ‘amazing’ performance/talk by a yoyo-acrobatics performer and he was pitching his fancy light-up yoyos to the lil critters after his show. Pinkxi exclaimed that the yoyos were going for ONLY $8 each and most of her classmates had made their purchase. BBM was not quite sure how to react towards the lil critter’s excitement, though he was somewhat uncomfortable upon hearing such sale tactics in her school. After taking a deep breath, BBM sat the excitable Pinkxi down and said he would like her to think about some questions first.

BBM asked her to remember which of her classmates had not made their purchase and guess why they had not done so. She knotted her brows and duly counted those friends to BBM. She hypothesised that either they didn’t have the money, or perhaps their parents had not allowed it. BBM nodded and assured her that since the $28 was her earnings, she was free to choose how she wanted to spend it.

But before she could run off to her piggy bank, BBM asked his second question – which meant more to her, getting a new yoyo or continue with her savings. Pinkxi was quick to say that she will have loads of fun with the toy though she admitted too that she really does not know how to work a yoyo very well. Then the 6 year old fumbled with the rest of her answer and got frustrated as she could not find the words to roll off her tongue. She was clearly torn between satisfying a more immediate want and feeling accomplished and keeping her earnings. Perhaps she was also hoping that BBM would just agree to buy it for her rather than dipping into her own piggy bank.

BBM calmed down the critter who was clearly lost in articulation, and reassured her there was really no right or wrong answer to his question. However it was really important for her to think about these questions even though it was frustrating. He explained that in the grown up critter world, they had to always weigh out how much they have with how much they can spend, and one cannot simply spend on something fancy immediately. After BBM illustrated to her how many loaves of bread $8 can buy, Pinkxi nodded with realisation that $8 does make up a huge chunk of $28.

Sensing that Pinkxi had more or less grasped his lesson of the day, BBM offered a solution – how about looking around other toy stores/ op shops to see if there are cheaper yoyos? Perhaps it might not be as fancy as the ones sold in school but BBM assured that it would be as much fun, and if indeed she was to find a cheaper yoyo, she would still have a fair portion of savings stashed away in her piggy bank. Pinkxi took a moment to think about it, and with a slight grin, agreed to the solution and proposed that BBM help her with her yoyo hunt soonish.

Guess they both have something to look forward to this weekend.